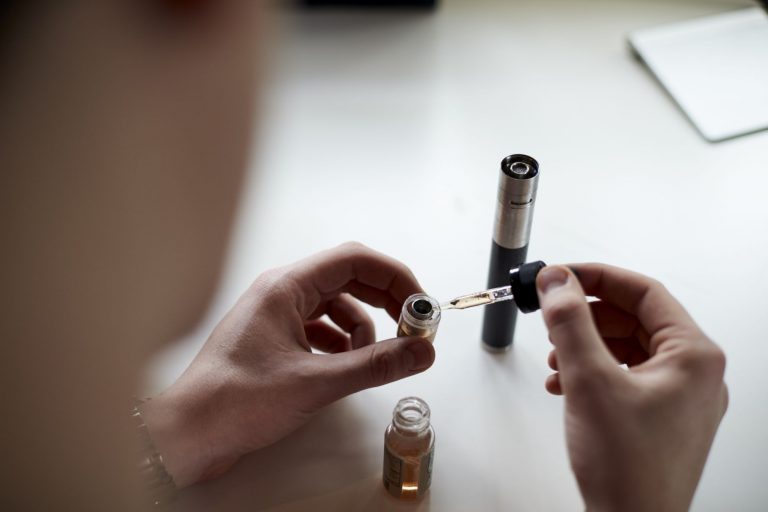 Blu e-cigarettes is one of many e-cig brands to offer their own branded e-liquid with their blu PRO kits, myblu vape pen vape products and also as individual blu e-liquid products.

Blu offers its 13 different e-liquids in 10ml bottles and 2 different nicotine strengths, 8 mg/ml and 16 mg/ml (1.6% – and a zero nicotine option). The UK limit on nicotine strength in e liquids is 20 mg/ml so Blu e liquids may not be strong enough for some smokers. Each e-liquid comes in a classic e-juice flavour and is made up of “Propylene Glycol, Vegetable Glycerin, flavouring additives and distilled water”.

For a full guide on the all the e liquids we have reviewed including the best VG e juice see our best vape juice reviews.

Reading other users reviews from both the blu e-cig website and other review sites, the flavours of the blu e-liquids don’t really live up to the hype. Some users have complained about the change in the menthol flavours, saying that the old version packed a bigger punch, whereas the newer recipe seems to fall flat.

Judging by the the average reviews around the web, users of blu e-juices are not too impressed. With the average star ratings on the actual blu e-cigarette website only coming up to around 1.3/5 for all 5 flavours.

Some users have complained about the constant discontinuing of their favourite flavours, or the ‘improvements’ of classic flavours that leave a dry taste in their mouth.
Blu e-liquids are priced at £5.99 per 10ml bottle, which is at the higher end of the price spectrum for e-liquid.

great substitute for ciggy, almost like real thing, bought this few months ago and recently purchased 2nd , so always have one charged.

I had used Classic for over 3 years and never found anything better. The new blu PRO is a disappointment. It tastes dryer than Classic and also lacks the clean taste that it had. I will have to research other brands now, something I didn’t really need to do before.

This ‘improved’ flavour is absolutely revolting. Complete waste of money. Been a loyal customer for 2.5 years but I will not be using Blu again.

Long time user of classic tobacco, but the new flavour is terrible. I’ll still use Blu clearomisers and batteries as best on market, but Socialites V Liquid is new flavour of choice after much testing!

I agree with the others, been using classic for years now and this new flavour is horrible, it tastes like a bonfire! Please change it back!