The physical size and weight of your vaping device is an important factor when choosing what it is you want to use, especially if you are making the transition away from smoking. For instance, a lot of smokers would find it difficult to switch from smoking cigarettes to vaping with a large vaping device such as the Smok Alien. Its sheer size and relative technical complexity would simply not be helpful to your average smoker. This type of device is really aimed at the “specialist” who for whatever reason wants to produce a lot of vapour and enjoys vaping as a hobby rather than only as a means to quit smoking.

Using a vape mod will cost you 3-5 times more in e-liquid than an e-cigarette to get the same 0.1 mg of nicotine.

A Bit of E-Cig History

When e-cigarettes first arrived the vast majority were not fit for purpose. They were very cheaply made and did not last more than a week and certainly did not give a consistent nicotine hit. One of the main issues was battery technology. Batteries then were just not good enough because of their very small size required to match the size of a cigarette. As a result many would-be vapers switched back to smoking. 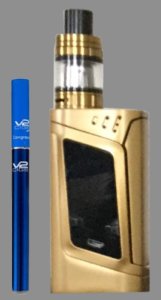 However, some manufacturers started making vape devices that did not look or feel like a cigarette but they had a large battery which was sufficient to vaporize e-liquid effectively. For example, the box mod or vape mod market was created. Indeed, the early mods were capable of delivering a consistent nicotine hit, BUT did not feel like a cigarette.

In order to quit smoking, we recommend users to transition away from cigarettes using a smaller scale e-cigarette or vape pen because it replaces the smoking habit with a similar feel and size device.

See our e-cigarette selector to help you choose

Battery technology has since caught up and a quality small scale 4.2 Volt battery can now deliver a consistent nicotine hit AND last as an all-day vape.

A second battery (at least have one reserve) will be required for both the mod and e-cigarette to allow vaping when charging the used battery.

Without going into too much detail, according to Med-Health an average smoker is used to getting around 0.1 mg of nicotine delivered into the body from one cigarette which contains approximately 1.2 mg of nicotine in total. For instance, you can see that not all the nicotine in a cigarette is absorbed by the smoker, only around 10% is absorbed. However, this 0.1 mg satisfies the craving if only for a while. You then need your next cigarette to get your next 0.1 mg “injection” of nicotine. Nicotine leaves the body with a certain time profile and then recreates within the smoker a new desire to smoke a cigarette. This is the reason why many smokers smoke an average of 20 cigarettes per day.

If you want more detail on nicotine absorption and which vape device suits you best see our “extreme vaping”  guide here.

It is important that you use the correct technique when vaping to ensure optimum nicotine absorption. For example, avoid using your e-cigarette for short bursts or using very shallow breaths. With a little experience you will find that vaping will remove the desire to smoke and when that happens you know you have got things right. Too strong of an e-liquid used in the wrong device can lead to feeling quite ill because of the overload of nicotine. Too weak a nicotine concentration or taking small puffs for short periods won’t have the desired affect. See our guide 5 Easy Steps to Successful Vaping

Vape mods operates at a higher power (10-200+ watts) than the small scale e-cigarette. For instance, a mod device will vaporize much of the e-liquid in one puff, this allows you to gain sufficient nicotine in order to satisfy you. Hence, releasing a huge cloud of vapour when you exhale from the vape mod.

At high power level you need to use 3-6 mg/ml of nicotine e-liquid in order for you to absorb your required 0.1 mg of nicotine

Today’s quality e-cigarettes operate at a lower power than the average mod. They will vaporize a lot less e-liquid in one puff so you don’t inhale as much vapour and therefore you don’t use as much e-liquid so you would save money .

At this power level you need to use a higher concentration of e-liquid, i.e. 12-18 mg/ml strength nicotine e-liquid in order for you to absorb your required 0.1 mg of nicotine

To get the same 0.1 mg of nicotine. Using a sub-ohm mod will cost you 3-5 times more per day in e-liquid compared to an e-cigarette.

* Studies suggest that next generation e-cigarettes are more efficient than the old type and still do not yield the same nicotine dose as quickly as a cigarette unless used properly.

Correct nicotine delivery and absorption requires the correct nicotine concentration in your e-liquid and proper vaping technique. In order to stop smoking I would encourage you to learn about these issues so that you increase your chances of success.

Evaluating Nicotine Levels Selection and Patterns of Electronic Cigarette Use in a Group of “Vapers” Who Had Achieved Complete Substitution of Smoking. September 2013 Konstantinos E. Farsalinos et al.

Nicotine delivery to users from cigarettes and from different types of e-cigarettes.