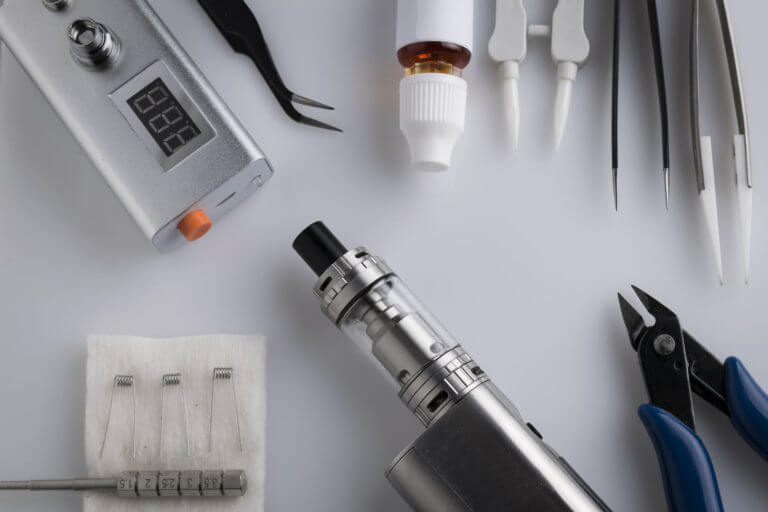 VAPE was named new Word of the year in November 2014 by Oxford English Dictionaries. Alongside the word “Vape” a new language has evolved, a new lingo, a new vaping terminology. We all have friends that have decided to take the plunge into the world of E-cig’s and “vaping” but when they are talking to you, or even amongst themselves it can be a bit like listening to a foreign language with words like Vape, throat-hit, atomiser, etc. dotted through the conversation, it leaves you feeling like you are missing out, but what do all these phrases and words actually mean…

To assist you (and maybe others that are new to this world) a little, we have complied a handy jargon buster, an e cig glossary to help you work out what the fuss is about.

This can be a slightly tricky one, as different people use different words for the same thing.

The job of the atomiser is to turn the e-liquid into vapour.  The atomiser heats up when you press the activation button on the e-cigarette and the liquid is then vaporised, producing the vapour that the user then inhales.

Any atomiser will have a particular resistance (measured in Ohms).  This resistance can be anything from about 1.5 Ohms to about 3 Ohms.

Some people, will refer to the entire tank as an atomiser, where a tank (or clearomiser), strictly, comprises the atomiser, the coil(s), the wick(s), the mouthpiece and the chamber.

An e-liquid that you don’t tire of using on a daily basis.

Well, a battery is a battery! But there is a bit more to be said.  On all ecigs except disposables, batteries are rechargeable and can usually be recharged 300+ times.

A standard battery will push out about 3.7 volts when fully charged.  This will drop to about 3-3.2 volts when it is nearly out of charge.  These voltage figures are pretty much perfect for most people most of the time, and there is no need to experiment with different voltages.

However, for the aficionado, batteries are available where you can vary the voltage (and sometimes the wattage too).  This might be useful if you are experimenting with different kinds of tank, as they can have different resistances. However with new generation Vaporizer this is done automatically and avoids a lot of stress and time wasting.

A cartomiser is a kind of tank container. It contains the wicks and coil and atomiser, and also an absorbent gauze-wadding where the e-liquid is stored.  They can be empty (so you will need to fill them, even from new) or pre-filled, where this job has already been done for you.  Even if it is, you can refill some pre-filled cartomisers pretty easily if they have a soft rubber bung in the end, rather than the more usual hard plastic bungs.  The plastic ones can be removed but it’s more difficult.

The great thing about carts is the convenience.  Everything is done for you – you just screw the cart onto your battery and you are good to go.  The downside is that the flavour and throat hit is somewhat muted compared to a tank set-up.

This is a cartomiser without an atomiser, gauze or wicks – it’s literally just an empty tube for holding the e-liquid.  This cartridge (sometimes, confusingly, called a ‘tank’) is used with a separate and specifically-designed atomiser to make up a ‘three-piece’ ecig.  These are really old tech and not used much any more – wisely, in my view.

-That part of the tank where the e-liquid is stored.  It is usually made of plastic, but some of the more expensive tanks use Pyrex, which is more adept at handling the higher temperatures produced by an atomiser.  So, with a Pyrex tank, you will not get a ‘platicky’ vape – this sometimes happens with cheaper plastic chambers.

Again, in its strictest sense, the coil is simply a short length of coiled wire that wraps around the (liquid-soaked) wick (s) and is in contact with the atomiser, so that the atomiser can heat the coil up.  Most tanks use only one coil, but some use two.  Usually, so the claim goes, a dual-coil clearomiser will be more efficient at heating up and vapourising the eliquid, thus facilitating a better vaping experience, with more ‘throat hit’ and vapour production.

On some e-cigarettes, you can buy what are commonly called ‘replacement coils’.  These are not just coils though as they include the atomiser and wicks.  The only thing that remains constant is the tanks.

Used instead of a regular e-cig cartridge to direct drip eliquids straight on the atomiser without removal of the tip. Drip tips are also standard on many CE type clearomisers.

Taking a draw of an ecig without any vapour being produced. Empty!

A method of cleaning atomizers to extend their life.

The fluid that is used in conjunction with an electronic cigarette.

Don’t panic, you’re not going to drown. Flooding occurs when too much e-liquid enters the atomizer. There’s plenty of help and advice online to maintaining your e-cigarette.

Another name for eliquids, Juice is a widely used slang term for the e-liquid used in your e-cig. There are thousands of variations on the market, including different nicotine levels and flavours.

Personal Charger Case – usually styled similarly to a cigarette packet, the PCC acts as a holder for ecig batteries and cartridges as well as containing a larger battery that recharges your e-cig battery – a must have if you are always out and about…just in case!

All e-liquid needs a ‘carrier’ – a carrier facilitates the transmutation, as it were, of the e-liquid into vapour.  The most common carrier is PG – used also in many foods.  The carrier in liquids can be 100% PG, 100% VG (see below), or any blend of the two.  Liquids that are heavily PG-biased deliver good throat hit, but a bit less vapour than liquids that are VG-biased.

On liquids that are 100% PG many find the throat hit is too harsh and the vape not that pleasant.

The tank is that part of an e-cigarette that contains the liquid.  It consists of one (or more) wicks, one or more coils, a chamber, an atomiser, and a mouthpiece.

The tank is screwed on to the battery.  Simple really.

This is the term commonly referred to in the industry as the feeling you get in the back of your throat when you inhale.  It is commonly associated with the notion of ‘satisfaction’ – the more throat hit you get, the more satisfaction you get. Several things affect the level of throat hit you will experience.

Probably the largest factor determining throat hit.  The higher the strength of liquid you use, the greater the throat hit you will experience. E-liquid strength varies from 0% nicotine to 2.4% (by volume).  It is possible to buy higher strength liquids, but there are no regular cigarettes stronger than 2.4%, to the best of my knowledge, most see no need to go higher than this.

The lower the resistance of your tank the more throat hit you will experience.

The higher the voltage (and therefore wattage, as watts = volts x amps) the more throat hit.

VG is just another carrier that might be in an e-liquid instead of (or as well as) PG.  VG yields a smoother vape, and more vapour.  On the downside it’s darker and more viscous than PG, and tends to give a bit less throat hit.

Every tank has at least one wick – some have more.  The wicks soak up the liquid, which is then delivered to the atomiser where it is heated and turned into vapour.  The wick is reasonably resilient, but it is quite easy to burn wicks particularly if you use higher voltages on a variable volt battery.

An ecigarette is as simple or as complicated as you choose to make it.  At its simplest, it’s just a battery attached to a tank that contains some eliquid.  When one part of the cig gives up just buy a replacement!  At its most complicated, ecigs can be built from scratch and eliquid can be hand-made and mixed to your own particular recipe –  this is all great fun, but far from necessary and is not advised – buy tested clean e-Liquid only.